It’s episode 25 of Children of the Force! Join us as we discuss The Force Awakens some more, talk about upcoming books and comics, tell a joke, rank the Star Wars movies … and more!

Listen, you will:
on iTunes
on Stitcher
on Podbean

I went to The Force Awakens in real IMAX and left the kids behind for my 4th viewing. This caused me to have some new observations and thoughts about the movie. We discuss:
-The reflection of Rey in BB-8’s eye.
-Kylo Ren ran away from Han until he couldn’t anymore.
-Does Kylo already have a new mask, of a sort?
-3PO’s golden arm.
-Had Luke been crying?

Liam and I both had a birthday. I got Fantasy Flight Games’ X-Wing! Liam got Disney Infinity with Anakin and Ahsoka!

The release date for Episode VIII has moved seven months further away. We all agree that this is probably for the best.

Anna thinks VIII will be called “Luke’s Return.” Liam thinks it will be called, “Luke Never Grabs the Lightsaber.” But of course, neither of them actually think that.

Poe Dameron gets a comic, and the first cover is a thing of beauty. We’re so looking forward to this thing. And oh my gosh, I just noticed that there’s an A-Wing on the cover! In the episode, we mention the possibility of Poe meeting up with his mom and/or dad. What if he meets up with his mom and she flies a mission with him?! How cool would that be? [edit: I’m just now reading the Poe story in Before the Awakening…]

From the USA Today story: The series will dig into Poe’s status as the top X-wing fighter jockey for General Leia Organa and leader of a squadron with an important mission. But the evil First Order also has a goal of finding Luke, and a new villain from the organization is introduced as Poe’s chief nemesis.

We also discuss the upcoming junior reader book series, Adventures in Wild Space. Not much is known about this series yet, but here are the three cover images that have been released: 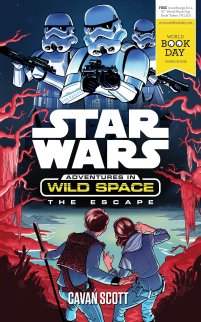 A long time ago in a galaxy far, far away….

When the parents of Milo and Lina Graf are abducted by agents of the evil Empire, the children must undertake a perilous journey across the unknown reaches of Wild Space to rescue them – and to discover hope for the future.

And here’s a post from the author of the first two books, Cavan Scott.

Wait, there’s a sacred village on Jakku that worships Hutts? Sign me up!

Why does Maz Kanata always have gum in her mouth?

We review A Princess on Lothal, the 10th episode of season 2 of Rebels. It’s a mixed review, but there’s no doubt that we were all glad to see just who that titular princess was.

We finally include The Force Awakens within our ranking of Star Wars movies (rankings subject to change).

And Liam asks who our favorite alien character is in The Force Awakens. Our answers end up k-i-s-s-i-n-g in a Wroshyr tree.

One thought on “Episode #25 – Luke Never Grabs the Lightsaber”